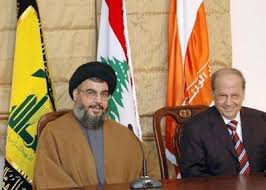 „In his ‚presidential foreign policy,‘ Aoun said Lebanon should ‚steer clear from foreign conflicts.‘ While such statement sounds good, it came in the same paragraph that talked about the Arab League. Aoun wants a policy independent of this league, read Riyadh and Doha. Aoun’s son-in-law Foreign Minister Gebran Bassil had already raised the ire of the Saudis when the league unanimously voted to denounce the attacks on Saudi diplomatic missions in Iran in January. Back then, even Iran’s President Hassan Rouhani denounced the attacks, and so did Iran’s closest Arab allies, like Iraq. Bassil’s vote stood out and caused Gulf countries to deport Lebanese expats. It seems Aoun thinks that vote was good and should become policy.

Right after giving Iran what it wanted, President Aoun delivered what Hezbollah wanted. ‚In the conflict with Israel, we will not spare any effort or resistance to liberate what remains of occupied Lebanese land,‘ Aoun said, thus trashing UNSC Resolution 1701, which calls for diplomatic resolution for disputed border territory between Lebanon and Israel. The paragraph that followed saw Aoun take Assad’s side in the Syrian war, as he declared that Lebanon will combat terrorism ‚preemptively,‘ a word that Hezbollah leaders often use to explain that the party should fight terrorism on Syrian territory before terrorists find their way to Lebanese territory.

Interestingly, Aoun made an exclusive connection between terrorism and Syria. Terrorism is a worldwide epidemic that nations are standing up to and fighting. But in Aoun’s speech, the word terrorism preceded his talk about Syria. ‚We will deal with terrorism preemptively … until we eradicate it, and we also have to deal with the issue of Syrian refugees by securing their swift return,‘ Aoun said, adding that his policy for Syria will be implemented in coordination with ‚relevant states and authorities.‘ In other words, Aoun plans to reinforce bilateral cooperation with the Syrian government under Assad, a government that has been isolated by three fourths of the planet’s governments.

Before closing his speech, Aoun presented Hezbollah with another favor. ‚Security stability is dependent on coordination between security agencies and the judiciary … and it’s the duty of the state to liberate both from political patronage‚‘ Lebanon’s new president said in a clear message that, on top of his priorities, will be to undermine the Internal Security Force (ISF), a police agency that has been on Hezbollah’s bad side for a long time, to the extent that some believe the party liquidated the agency’s top intelligence officer, Wissam al-Hassan, in October 2012.“

ISRAEL - WAS GEHT MICH DAS AN?